I have just caught up with the facts about the March 1946 study of all babies born in one cold week.  Health visitors went out to every woman who had given birth in that week and asked questions about the free extra pint of milk, who managed the house during her confinement, how much was spent on clothes for the infant (anyone else remember matinee jackets?) and for the mother herself, for example. The results shocked the nation since it revealed how much worse the experiences of working class women were compared to the better off and its findings were in time to be incorporated into the new NHS with free maternity care and other benefits. Since then the babies have been followed throughout their lives (they are now in their late sixties and most have enjoyed taking part) and similar studies have been undertaken. I think that is a brilliant and original scheme, carried out at a time of need and deprivation: do we have the imagination now to think up anything similar?
Posted by Barbara Daniels at 01:32

I am a great fan of Welsh Castles and visit them on local bus routes. Yet I succumbed to the beauty of Bodiam reflected in its moat when I... 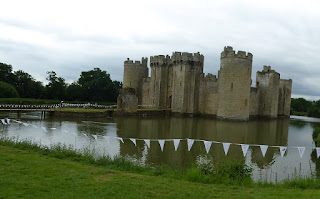 This blog reports the adventures of my alter ego: Doc Barbara's fabulous exploits.

My rhyming poetry may be viewed at Formal Poetry and other idiosyncrasies.

This website contains pieces on some of the main English writers.

I have a blog with hints on English grammar and usage plus tips on approaches to literature.

It is called Top Marks

Welcome to my very personal viewpoints. I make no attempt to be fair or impartial.

Barbara Daniels
I was born in Ormskirk (Lancashire) before the outbreak of WWII and have moved via Oxford, Aberystwyth and London to my present home in Monmouthshire where I am an established poet.